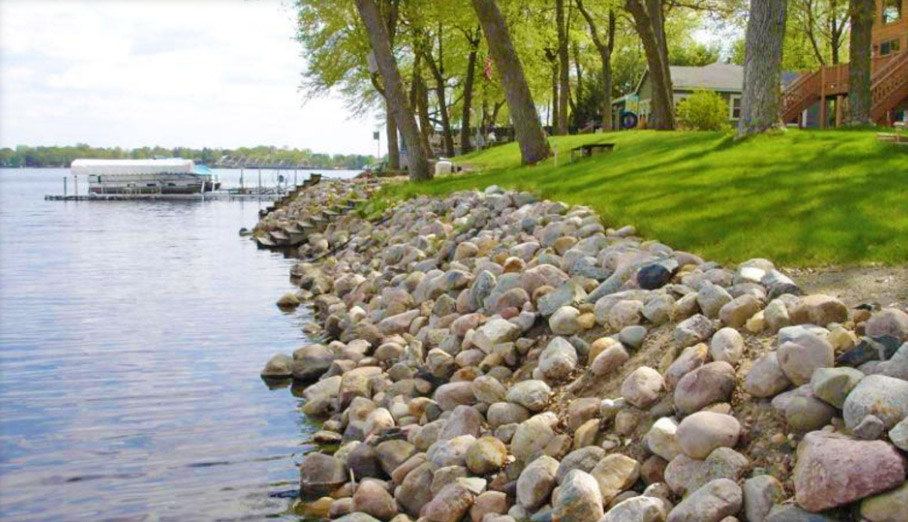 Riprap, also known as rip rap, rip-rap, shot rock, rock armor or rubble, is rock or other material used to armor shorelines, stream beds, bridge abutments, pilings and other shoreline structures against scour and water or ice erosion. It is made from a variety of rock types, commonly granite or limestone, and occasionally concrete rubble from building and paving demolition. It can be used on any waterway or water containment where there is potential for water erosion.

Already Have a Seawall?

The energy in boat wakes reflects off the perpendicular walls without much absorption of that energy, keeping the water agitated and sediments constantly resuspended.  This results in increased turbidity and reduced light penetration through the water column.  The vertical nature of a wall prohibits mangrove recruitment and does not provide the substrate necessary for beneficial habitats e.g. oysters reefs, to become established.

Placing riprap (rocks) in front of an existing seawall will alleviate some of the negative environmental impacts of a seawall while lengthening its life by reducing scouring effects at the base of the wall and decreasing the energy of waves pounding into it.

More information on natural shorelines can be found at Florida Living Shorelines.

Email or call us today for a quote and to schedule service.

We Service the Following Areas